Grenada and Trinidad May 2008 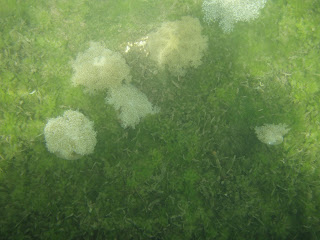 We entered the country of Grenada and checked in officially in Hillsboro, Carriacou, a small island in the Grenadines north of the actual island of Grenada. We anchored out and took the dinghy in to the main dock at the center of town. The Customs officer was asleep in a chair in an alcove at the end of the dock. He was surly when I woke him and his strong accent confused me when he spoke. We had some miscommunication and he got a little ticked off when I said 'yes' to a question that meant something other than what I heard. When we finally figured out he was asking us about checking out, not in to the country, we were pointed to another person who was much friendlier. Now that we'd thoroughly pissed off the sleepy official, I was glad we were planning to check out from another location!

We had to go to the local police station to check in, fill out the paperwork and then take it a block away to a computer school lab that had a photocopier and make 4 copies for the Immigration officials. They didn't want to incur the cost of the paper or copy machine, so every yacht has to go thru this routine of paying for its own copies from another party--so silly!
We picked up the glossy, full-color tourist books here and there seemed lots of neat things to see and do on this island. We anchored in a bay popular with cruisers and partied at the floating Tiki Bar and saw upside down jellyfish that looked like underwater flowers. (above)
We sailed down the coast to anchor in St. George's Lagoon, a soupy area surrounded by marina slips. They told us that anchoring will soon be prohibited as the entire lagoon is being turned into a mega-yacht marina. Seems to be a trend in the Caribbean islands these days. 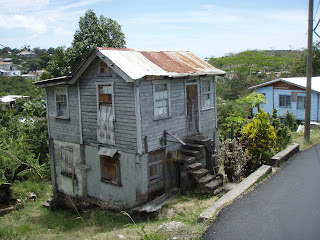 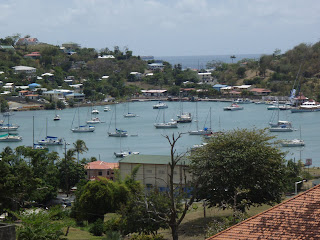 We wandered the area for a couple of days and then sailed back up the coast to nearby Moliniere Bay where we read of an underwater sculpture garden. We dinghied over to the bay where there were snorkel and dive boats with paying tourists decked out to see these amazing concrete sculptures put on the seabed by an artist who wants them to be the beginning of artificial reefs for the sealife. These were full-sized statues of people and things: a set of 18 statues of women based on real women named Grace; a man on a bicycle; a work desk with chair and typewriter; a ring of children holding hands, a gardner with straw hat (made of metal) and others. Very cool! Of course I forgot my underwater camera on the boat, so I don't have pics, but I was glad we saw them when we did as parts of them are already being knocked down onto the sand. We don't know if people or Mother Nature is knocking them over, but they will become jumbled concrete reef structure as time goes on.

We took a public bus to the other end of the island to the Grenada Chocolate Factory to see the cocoa being processed into chocolate and taste the final product. The 'bus' was a 12-passenger minivan with a 'conductor' responsible for the money and seating arrangements. He packed 19 of us into the vehicle and we sat cheek-to-cheek and thigh-to-thigh as we sped through the Grand Etang Forest Preserve, tires squealing as we rocked from side to side on the winding, twisting road. We'd have been battered black and blue with the motion if there'd been any room to move in the bus!
We were dropped at the front door of the Grenada Chocolate Company and the van left. Woe was me when a worker told us they no longer allowed tours as the owner in New York Cit 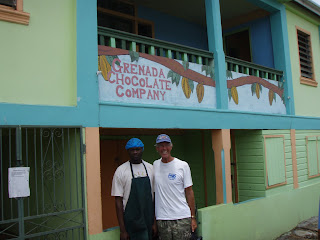 y thought the tours distracted his workers and reduced production. (New York City??? reminds me of the Pace salsa ads). We had to trudge back down the hill and backtrack along the road for a mile or 2 to the Belmont Estate where they collect the cocoa beans and provide a tour that explains the process, including video of the place we just left; they provide samples, too!

Worldly as you may think I am, I'd never seen a cocoa bean off the tree before, so I was pretty interested. The slimy white seeds in the yellow, football-shaped pods weren't what I'd had in mind. The mucus-like covering of the beans is quite sweet and I wandered around sucking on the beans til the white stuff was gone and then saving the dark purplish-brown seeds that actually contain the cocoa. Local growers bring the wet beans to the Estate and have them weighed for payment. The beans are then put into wooden fermentation bins and hand-shoveled to a new bin every other day to promote even fermentation. The smell is reminiscent of a winery. 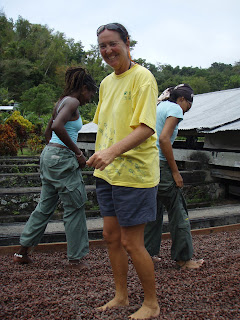 After 6 or 7 days, the fermented beans are then laid out on large wooden trays to dry in the sun. The trays can be rolled under a cover if it rains. Every 1/2 hour the beans need to be turned so they dry evenly. Employees "walk the beans", turning the layer of beans with their feet so they all get some sun and air. "Sure, go ahead" was the response when I asked our tour guide if I could try it. A highlight for me as I shucked off my shoes and socks and shuffled through the warm, sticky beans on one of the wooden racks! No need to worry about germs or such as the beans are cleaned and processed enough in later stages to kill anything that you can think of! My feet were still sticky and my socks still smelled like cocoa when I took them off back at the boat that night! And we nibbled handfuls of the dark chocolates with 60% and 71% cocoa at the end of the tour.--very yummy! They make organic chocolate bars and the Grenad Chocolate sells for over $5 a bar. Too pricey for me to buy, but I sampled plenty waiting for the rain to stop so we could catch a bus to the rum factory.

Ahhhhh rum! We've been having the daily tot of rum with a bit of Coke and lime for months now. Jason actually calculated the rum : coke ratio and then determined how much Coke/Diet Coke we needed to buy to handle the remainder of the 2 cases of rum we'd bought in St Martin. Since we were imbibing the stuff, we thought we'd go see one of the oldest rum distilleries in the islands. 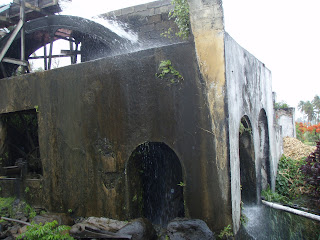 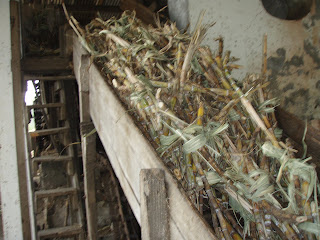 The Rivers Rum distillery still uses the original building and processes from 1785 to make rum the old-fashioned way. It has the oldest original operating waterwheel and it is still what powers the conveyor belt and crusher for the sugar cane. The manual processes keep about 80 local folks employed in the very inefficient creation of the spirit, but it is pretty interesting, and you can get up close and personal with the whole process. The rum that comes out of the still (just like the moonshiners use!) is at least 75% alcohol (that's 150 proof!) or they send it back through the process to get stronger! It's not even legal to carry the stuff on an airplane at that strength, so they dilute it down to 69% alcohol for export purposes. I wouldn't even try the free samples of the hi-test stuff, and the low-test mixed into a fruity rum punch still melted the bones pretty quick. Whooo! watch out for that stuff!
We left St. George's and since it was pretty still, we removed the 75-lb. anchor and tried to unkink the 250' of chain attached to it. Every time we drop and raise the anchor, it swivels and kinks a little and we wanted to unkink the 600+ lbs of chain with the help of windlass to raise it back up instead of having to offload it all onto dry land to do it by hand. Then we motor sailed around the end of the island to Prickly Bay and met some cruising friends. We hopped along the southern coast to several different bays looking for good snorkeling stops, and ended up in St David's. This was the last stop before an overnight passage to Trinidad, and folks were waiting for the wind to settle down a bit before making the crossing.
Our friend Ted, with whom we'd sailed to Bermuda and sailed in the Chesapeake, was making a single-handed transAtlantic crossing from Spain to Florida when we suggested he come further south and join us for some Caribbean sailing. He'd been aiming to meet up with us since we were in St Martin, and his path finally intersected ours when he made his first landfall in 6 weeks in St David's, Grenada the day before we were to leave for Trinidad. We'd kept in touch via the SSB radio for the past couple of months, and thought he wasn't going to reach us before we hauled out and left for home. We only had a very short time to visit as we left the next night for Trinidad.
We sailed overnight, with the wind and current both pushing us northwest. We passed the Hibiscus gas drilling platform off the coast of Trinidad in the wee hours of the morning. It was all lit up and you could see the massive structure for miles! Once we passed the rocky canyon of an entrance to Trinidad's bay, the wind stopped almost completely and we were in beautiful protected waters again in Chaguaramas.
We cleared Customs and Immigration (a bigger ordeal than it really needs to be, I think) and anchored out in the bay. The local boats zip around at full speed, creating wakes and making the anchorage pretty rolly. We tied up at the marina dock the day before getting hauled out and worked ourselves stupid getting the boat ready to be lifted out and stored for the hurricane season. So much activity to prep the boat! Now it's sitting on the hard waiting for us to return.
Addendum as of 9/9/08: we just heard that cheap fuel in Trinidad is no longer. The local government has now decided that it won't sell the fuel to foreigners!! They might allow one place to sell to foreigners at the 'international price' which is over $4/gallon. There's quite an uproar going on in the yacht harbor over the ordeal and some folks are feeling like they're being held ransom since they can't get diesel for the yachts nor gasoline for their dinghies. Guess we'll fill up on food and head out if that is their attitude! Luckily our diesel tanks were filled before the boat got hauled out. But our dinghy is going to need gas so we aren't sure what will happen. Keep your fingers crossed for us
Posted by yolotrautz at 2:08 PM No comments: