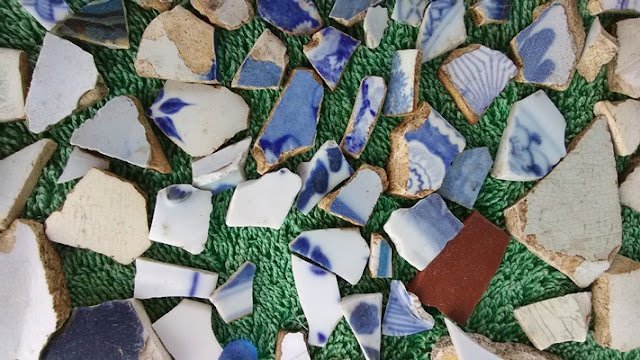 Yes, we're still here in Christiansted, St. Croix, USVI.  The pottery shards above are over 200 years old!  I found them snorkeling off the beach in Frederiksted or digging through dirt around old forts or other inhabited places from the Danish occupation back in the late 1700's to 1800's. These shards are from the 1760-1840 range, according to the research I've done. The shards are called 'chaney', a mix of China+money, a word coined by the children of bygone eras who used to collect the shards and grind them into round shapes and use them as pretend money amongst themselves. Chaney hunting became my favorite pasttime during the last few weeks here. My buddy, Kellie, is addicted to the treasure hunt and would pick me up and drive me all over the island, often with our snorkels, and we'd always come away with handfuls of the stuff.  I love the hunt for treasure! 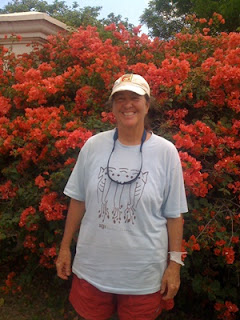 Karen in front of one of the most beautiful bougainvillea hedges I've ever seen.  All the flowering branches filled the space and the hedge lined an old wealthy plantation property that now belongs to one of the richest persons on the island.  This hedge had the most evenly-filled color of any I've seen and it was full color for a very long frontage.

The aluminum dinghy we now use exclusively.  Our AB inflatable dink blew a huge gash in Dominica and this is now our only transport to land. 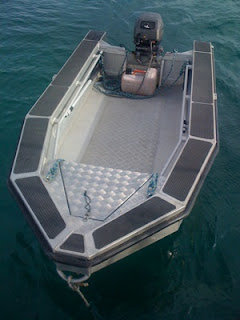 The new inter-island ferry at its birthplace in Cane Bay. 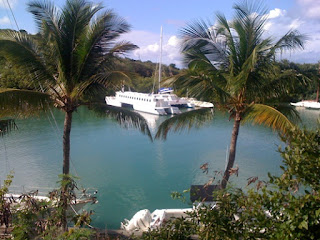 That's Kellie, my chaney-hunting friend.  She was so much fun to spend time with. She moved here from IA with her hubby on a 3-year work contract, but she has her days free most of the time, so we got to go places all over the island. 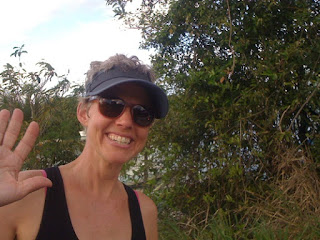 This is the Millennium Memorial that was built for the year 2000. It marks the sun's solstice for 2000 at this, the farthest eastern point in the United States.  The four stone towers point in the four directions of the compass and at the solstice in 2000 the sun shone through a little slit in the center column onto the sundial floor.  The memorial looks like two "M"s, standing for 2000 in Roman numerals and the Millennium Memorial. Pretty clever.  Kellie and I were going to hike down to the beach from here, but our friend warned us that the parking area here is a prime target for theives (it's way out at the end of the island where there are no homes) and we shouldn't go there with anything in the vehicle.  We were told to take nothing of value and leave the windows down as a sign there is nothing of value in the car to avoid break-ins.  We had our snorkel gear in the car and decided to pass on the hike and not take the risk. 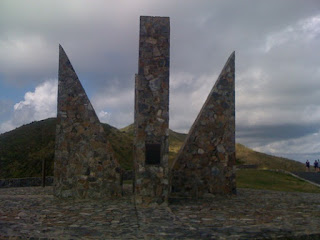 Kellie and Karen at the Millennium Memorial 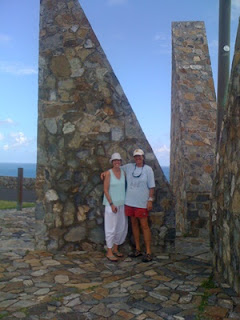 This view is a beautiful palette of blues when seen in person.   The view looking back from the east end of the island along the north shore.  That's Buck Island in the distance, a National Marine Park. 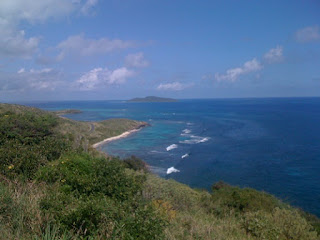 The pretty hedge outside a vast estate. 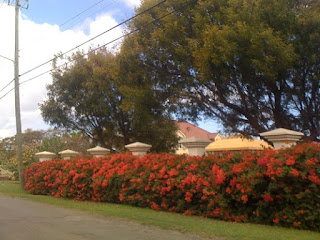 You can see how evenly spaced the color is in this bougainvillea hedge.  That's hard to do unless you have some great gardeners. I was impressed. 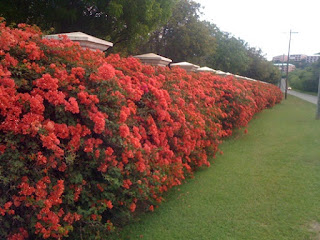 This is the caterpillar of fenders that Jason set up for me to use to tie the dinghy alongside YOLO at night if I couldn't lift it into the davits.  Jason had to fly home as his mother was in her last days, but I had to stay on board YOLO.  These fenders kept the dink from banging into the boat when the tide changed. 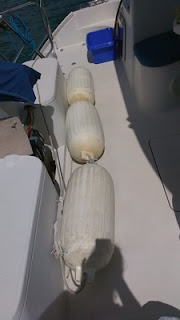 One of my hauls of chaney and old glass bottle bottoms.  The top of a jug was given to me by Steve from Gallows Bay Marine. He had lots of chaney and bottles and wanted to get rid of a plastic tub of it so he could reuse the tub; Kellie and I relieved him of the burden and gained some cool stuff. A win-win. Another day, another haul of the pottery shards and glass.  The thick old glass looks black, but if you hold it up to the sign, you can see it is really green or brown. 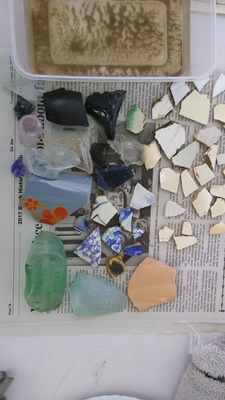 An old chimney stands alone in a field. Perhaps from an old sugar mill or processing plantation.  Kellie and I thought we might find some chaney here, but the grass and weeds made hunting impossible.  You couldn't see the dirt. 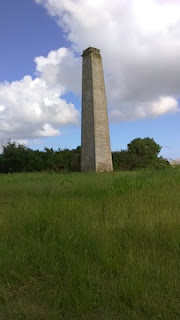 This is the new inter-island ferry from St. Croix to St. Thomas on its maiden run.  It looks like two catamaran hulls with an airplane fuselage set on top.  A funky design, but it works!  It took the owner over a year to get all the certificates and approvals to actually launch it for passenger traffic.  At $50 each way, it's about 1/2 the price of the seaplane, the only other option between the two Virgin Islands, so this is a welcome addition to the transportation scene. 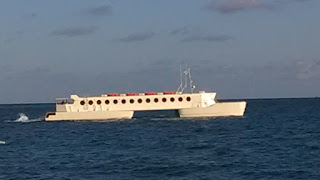 A view at Fort Christianvaern, here in Christiansted.  All the government-owned building in the historic area here are the same creamy yellow so you can spot them readily. 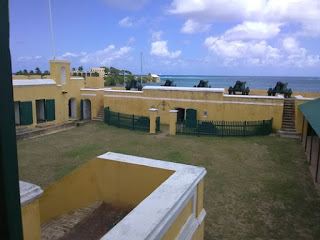 A view from the fort across Gallows Bay towards the Customs dock and Gallows Bay Marine, one of my favorite hangouts.  The owner, Steve, is a hoot, very friendly and generous and grows arugula, basil and rosemary behind his store, which I gathered regularly.  He provides free wifi and free coffee for people he likes (me included).  He sells beer for only $1/can, making it the cheapest on the island and locals hang out here, calling the marine store "the best bar on the island!"  He also sells marine and fishing supplies at prices that beat the marina store nearby.  With his location just outside the gates for the new ferry, he opens early and has been enjoying a huge boom in business with the early ferry traffic and the local fishermen who also head out at the crack of dawn. Good on him! The St. Croix Marina just changed hands and is destined to become a mega-yacht destination, so he may be the best deal in town for many things. 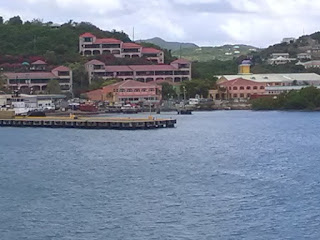 A view from inside the fort looking westward across the mooring field for local boats. 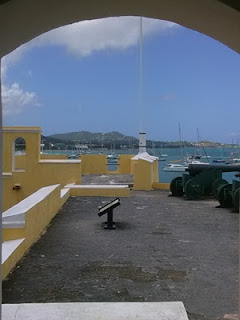 Looking out towards where YOLO is anchored off to the Northeast of the point where the fort is located. 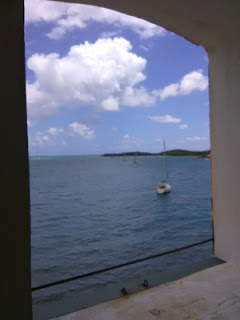 They take good care of these historic buildings here.  This is the inside court of the fort. 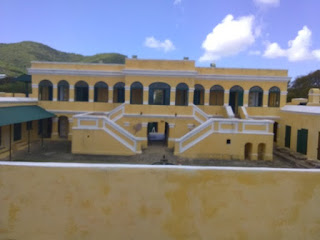 That's Kellie digging through the dirt looking (and finding) chaney near the fort. We'd just been to an exhibit on the historical value of chaney at the fort and decided to look across the creek from the fort just to see.  If I'd been a fort dweller and had broken china to dispose of, I'd probably throw it out across the creek.  Lo and behold, we found tons of the pottery shards there but had to keep a low profile as the fort still maintains that this land is "disputed ownership".  If the gov't owned it, they should clean up the trash and homeless living debris from the land. 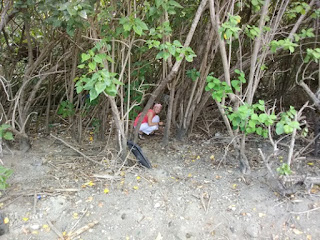 Another haul from snorkeling off the beach by the fort in Frederiksted.  The ships of yore used to anchor off the fort on the west end of the island here.  Now the cruise ships dock here. The china and porcelain and pottery were often brought from Denmark for locals or as ballast in ships. If it was broken, the local inhabitants didn't want to pay the tax on it and threw it overboard instead. Others claim the crockery was tossed overboard and replaced with more valuable rum, sugar and molasses by the ship's owners for the return trip.  Whatever.....lots of old stuff is still found washing ashore onto the beach here. 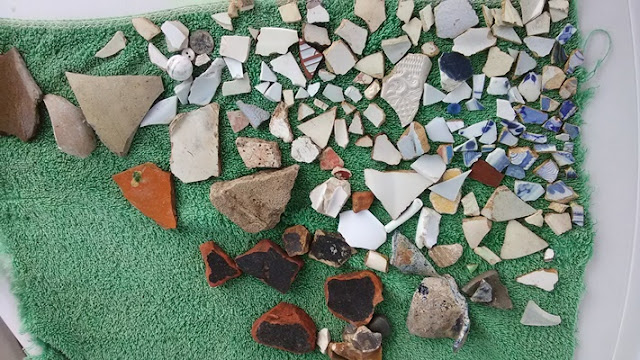 The blue and white is the most often found chaney, as the Danes loved their Japanese porcelain designs back in the late 1700's.  Much of the chaney is the whitish 'creamware', but the bluish tinge to the pottery and porcelain makes is part of the group referred to as 'pearlware'. The plain pottery, as in the dull grey-brown and orange/black tiles above is often the old slave pottery.  Not as pretty, but still sought after for its age and historical value.  I'd spend lots more time hunting chaney if I had more time here! Posted by yolotrautz at 1:25 PM No comments: