Boeni Bay and off to South Africa Oct 2015

Our last stop in Madagascar was Boeni Bay.  We'd heard this was a better place to sit and wait for a weather window and stage ourselves to cross the Mozambique Strait.  We had to finesse our way in through a myriad of sand channels and underwater sand bars, keeping an eye on the depth sounders in both hulls.  We just head for the deeper of the two and zig zag our way in along the waterway.  We crossed over a sand bar and dropped the anchor behind a penninsula to wait for the right winds and weather.
This mini sand cliff was on the shore and I rode in with folks off of Crystal Blues to investigate the shoreline.  Unfortunately, the biting flies (lunga lunga as a local called them) drove us back off the shore in just minutes, so we didn't get to explore very much. 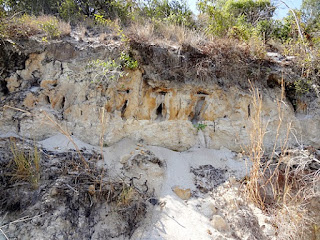 I'd seen the locals take water jugs to this place on the shore and they were splashing and bathing in the pool.  Once we got ashore, this was the pool.  Looks like a children's sand castle diggings, but the fresh water must pool up at low tide and the locals get their water here.  No reason to walk this far down the beach for more seawater.  The tide has broken through and the pool is now just a salty pit. 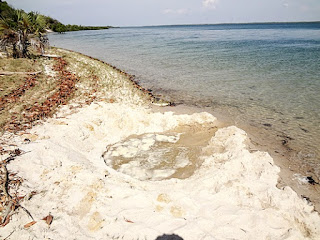 At low tide, the notch in the shore from an old river was nearly dry and the exposed mud was green with growth.  We had to relocate YOLO before this low tide emptied out to prevent sitting on the bottom mud overnight.  Gotta pay attention to the tides when picking anchoring depths. 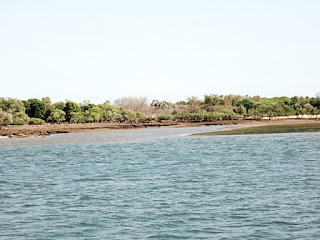 The village on the shore at low tide.  Their canoes sit way up on the beach, but at high tide, they are right at the water's edge. 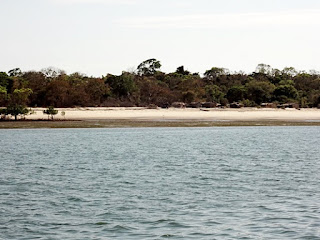 The full moon coming up over a building cloud bank.  A lot of energy in those clouds and this Cape St. Andre on the western edge of Mozambique is renowned for it violent electrical storms and bad weather.  I can understand why when I see these clouds building up late in the day. 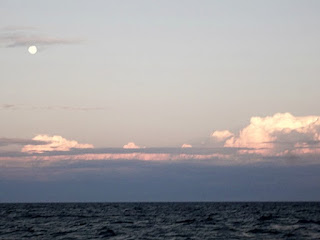 Looking the other way at the same time, this is the sunset that was giving the sky its color. 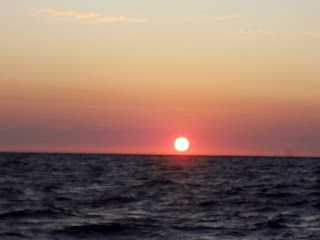 And we're off to Mozzmbique or South Africa, depending on how far we can get before the weather turns bad on us.
We didn't have to wait long!  The first night out, we got caught in a nasty squall that spanked us pretty badly.  I awoke after 11pm to Jason's faint cries for me.  I went up to the cockpit to find sheeting rain and howling winds of about 40 knots and Jason yelling that he'd burned his hand badly.  Rope burn.  Trying to let out some of the mainsheet, it zinged right through his hand, shredding the skin and blistering his fingers and palm.  He couldn't see out of his glasses with the rain and I struggled to get the genoa furled by myself while he tried to control the boat.

The main sail was plastered against the spreaders and shroud and looked like a party firecracker--twisted into a cylinder with the ends sticking out.  Definitely something broken and/or torn and I wasn't sure it would come down.  I was soaked and shivering with cold and fright.  I only had a t-shirt on and had to get a jacket and shorts on to help any more.  We eventually got the sails down and the boat under control and heading in the right direction again.  It wasn't pretty.  Until we got daylight, we wouldn't know if we could continue or would have to head back into a Madagascar port.

The inspection in the morning light showed we had broken some battens.  It takes a lot of force to break a stick of fiberglass like this.  Looks like it exploded in two. 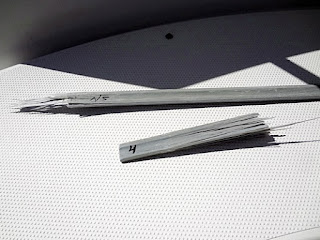 Once we got through the worst of it Jason got some rest.  Note the bandage on his hand where it was badly rope burned. 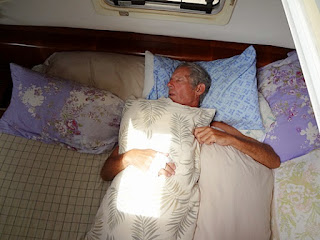 When we were evaluating the alternatives for continuing, this is what Jason came up with as Plan B--his bottle of scotch!  But at least the sail wasn't torn or shredded and we continued across the Strait. 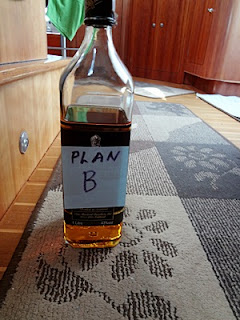 We did make it across the Mozambique Strait, using the current and the winds as much as we could.  A strong high-pressure system down at the southern cape of Africa promised to send big winds out of the south and we needed to seek shelter to wait out the weather.  We found protection at Bazaruto, Mozambique, a 25-mile long sand dune island that is a national marine park here. We found good anchorage here and waited out the storm for nearly five days. 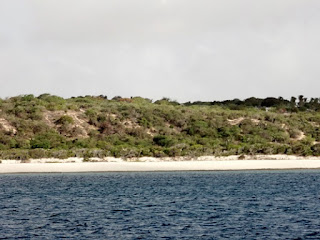 The island is still naked sand in some parts, with trees covering the lower parts that are in the lee of the wind most times. 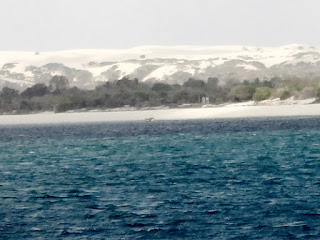 A local motorized fishing boat once the wind calmed down.  Most of the local boats didn't have engines; they still row here and the paddles have triangular shaped ends.  Very different from what we saw just across the Strait.  Most of the fishermen here rowed out their nets and the people on shore heaved them back in.  We had to leave before they surrounded the yachts with nets. 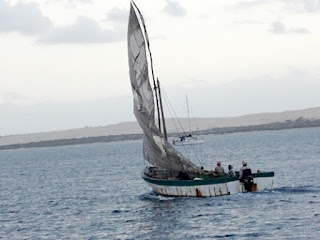 Once we finally left Bazaruto, we headed out of a narrow, shallow exit at the south end, rather than backtrack the way we came in.  It would save us hours if we could cross the shallow spots, so we aimed for near high tide and followed some waypoints out that a fellow cruiser before us had relayed.
The water got pretty skinny and we could see the bottom as we left.  That lovely aquamarine color of water over shallow white sand is pretty to look at but risky to cross when there are only a few feet of water below the boat and the swells are creating troughs that moved most of the water out. 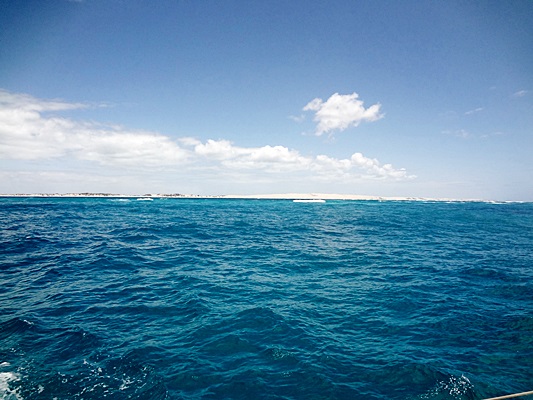 We hobby-horsed our way out over the shoals, through the swells and breaking waves and headed down the coast towards Richards Bay, South Africa.  There's only one hidey hole between us and Richards Bay now so we are watching the weather closely.
This cargo ship had the whole ocean to traverse, yet found it necessary to come within 1/2 mile of us to pass us and cross our bow. 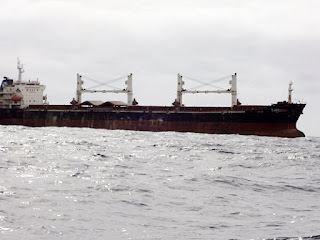 YOLO sitting comfortably  at anchor in Bazaruto after the winds were through.  Next stop:  South Africa! 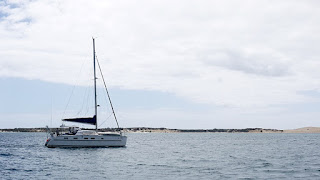