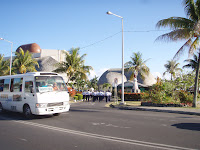 changing of the guard in Apia, Samoa. They have a band and a mini parade every time they do this every day. 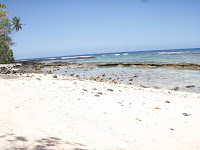 The beach behind our bus companion's home on Paradise Beach. 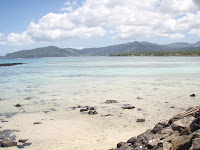 Another view of Paradise Beach, made famous in an old 1950' movie starring Gregory Peck. 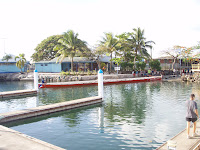 A longboat, which takes 33 paddlers to move. They were taking this boat out at our marina. They lined up a bunch of old tires on the pavement and the 30+ men heaved it out the marina and all the way down the street to its storage field. Took a couple of hours to move it all the way and traffic sometimes just had to wait for the next heave. These are only used for celebrations and it was time to put it away. 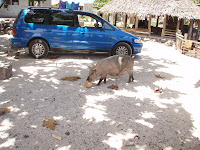 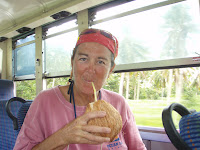 Karen sipping her cold coconut on the bus. Very refreshing! 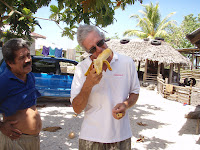 Jason eating a massive Samoan banana. Even he couldn't finish the whole thing!

YOLO in Samoa Sept 2011
I never got to the Charlie the Tuna statue in American Samoa. We cleared out, did yet another run to the stores (not a can of diced tomatoes to be found!!) and grabbed some fresh produce from the market. Jason went to clear us out while I lugged the bags back to YOLO. While waiting for him to get back, we started to drag again! After a slow procession across the empty water, I began to get close to another boat so put out a call on VHF and 2 dinghies arrived in moments to offer any help they could. I let out more chain and Jason arrived in yet another dinghy answeing the call. We didnt' want to reset the anchor as we wanted to leave, so we quickly got YOLO ready and finally brought up the chain at dusk. It was so full of fishing line, fishing nets, plastic bags, Tyvek bags, and metal parts filled with muck that there was no room left for the anchor to grab the mud and set! No wonder we dragged! There was no room left on the flukes to use.

So we bobbed along in the light winds overnight to Apia, Samoa. We arrived into the marina, run by the Port Authority here and got tied up straightaway. They sent a little boat out to meet us and lead us in past the commercial wharf and to our slip, then helped tie us up there. Very nice operation. It was late afternoon, but Health and Quarantine officials showed up to clear us in. Customs and Immigration never showed up, but the marina manager gave us Visitor passes to get in/out of the marina anyway, with a request that we come to her office at 9am the next morning to advise whether C&I ever showed up.

I couldn't get off the boat. Literally! YOLO's transom steps stuck out beyond the floating finger pier and it was too high for me to jump off to the dock without risk of hurting myself. If I could get off, there was no way for me to get back on! We arrived on my birthday (Sept 27th). I was tired when we arrived, and a cold beer from our neighboring boat and a good night's sleep were the best way for me to spend the evening. I put a deck chair on the upper deck of YOLO and watched the fire dancers in the bar across the street where Jason had joined some fellow cruisers to watch the show. We finally asked the guy on the boat next door the following day if I could use his dinghy to step off my boat and onto the dock. Alek was quite a character and readily agreed. It was a spongy moving step, but it worked.

I finally got off the boat when Jason went to the office the next morning to see about Customs. As I was standing talking to the guard at the entrance to the dock, who shows up? Customs. And they were not happy that Jason and I were off the boat before being cleared into the country! I tried to explain that the marina manager advised us to come to her office to arrange for Customs to come to YOLO, but he spouted the law at me and said we could be fined. I went back to the boat, they called the office and sent Jason back, and the Customs guys came aboard. Just to remind us who was in charge, they made me trot out my prescription medications and did a cursory search of the boat, making me open lockers and cabinets and such. The liquor cabinet was pretty sparsely stocked, so they seemed happy enough. I'm sure they did the search just because we'd gotten off the boat, and they made the electrician wait until they were done to help us get power to the boat. Ah, bureaucracy and gov't officials.....

We wandered around Apia, but there isn't much in the way of tourism here. Samoa is a pretty big island. Another couple wanted to rent a car with us the next day, but he couldn't get the price down to a reasonable amount ($180 Tala/day, or about US$80) and getting fuel was an added big expense, so we just decided to catch a bus somewhere and pack a lunch.

With bus schedule and Tourist Board map and pamphlets in hand, the others determined where we could get to that looked interesting. I truly didn't care where we went and decided to play passenger instead of navigator or decision maker this day. I'd wanted to see the waterfalls and slide down the slippery moss-covered rocks, but it is the end of the dry season and they are all dried up. We found the bus with the decided destination on it and I hopped aboard to save a seat. As the bus started to fill with people and purchases (30 lb. bags of rice, cases of ramen noodles, luggage, etc. tucked along the aisle), the guys came back and waved me off the bus, realizing that we could not get back on a bus the same day. Nobody wanted to stay overnight in a distant town or village.

So we were looking for alternatives as buses started pulling out of the lot. An Australian voice called to us from a back window of a bus, saying if we were looking for the Paradise bus, this was it. And yes we could get back by bus later the same day. So we hopped aboard and made our way to the back of the bus to meet the voice. George claimed he saw us pointing to places on the map and figured we were looking for a bus to the tourist destination. He was full of information about the "Return to Paradise Beach"-- a location where a 1950's Gary Cooper movie was filmed. We made 3 rounds between the other bus depot and the one we started at, the driver trying to fill the seats before leaving town, but finally got on the road.

Once on the road, we had a wonderful chat with George from Brisbane and he introduced us to his 'uncle' Lemalu next to him and said he'd show us where to catch the bus back later in the afternoon. George was like a tour guide and readily shared his info on the locales. Lemalu got out at the beach with us and said the bus would pick us up there--at his house! at 1:45 pm. He took us back to meet his mother and brother and offered to put us up next time we visited if we'd just come to this home. We were offered bananas and drinks along with his hospitality. Samoans have been very friendly so far.

Homes here are more like open pavillions. No walls or windows; just beds, couches and chairs or mats in a big open building with a roof. They have curtains that they can hang to get a bit of privacy and some may have woven mats they can hang to section off parts if desired. But by and large, it is truly open-air living here! Many have a traditional closed in building they can occupy in the rainy season, too.

We walked the famous beach, but most of the sand has relocated over the years with weather events, so it has all changed. We ate lunch, swam in the shallows, scavanged for seashells, then caught the bus at the bus stop Lemalu had pointed out to us, as we just weren't really sure if the word would get passed to the bus driver to pick us up at his house. We got on and the bus continued on to the house!

It turned into a school bus as dozens of uniformed children climbed aboard and filled the seats, even sitting on each others' laps. The smiles and grins must've hit a soft spot in Jason's heart because he made his way to the front of the bus and talked to the bus driver; he offered to pay for their ride home today if they promised to do something nice for someone else before they went to bed that night. The bus driver's assistant announced that in Samoan and cheers and clapping and thanks rang out in the bus. A short while later, the school teacher gave the bus driver some money and instructed him to buy us all cold drinking coconuts at the next stop! What a treat! Freshly husked and chilled coconuts with a hole for a straw gave us a cool drink for the rest of the ride back to Apia! A totally unplanned day turned out to be a wonderful experience.

When we returned to Apia, the city was in full fever for the World Cup Rugby, akin to the hullaballoo that goes on at Super Bowls. Samoa was playing South Africa in the quarter finals and this country was hyped up for it. Flags being waved everywhere, face tattoos and t-shirts with Go Manu being worn everywhere (Manu is the team name for Samoan Rugby team, like the Lions or Broncos or such); vehicles driving around with teens standing in the back waving and shouting their support. There was a lot of the local brew, Vailima, being consumed in the bars with TVs.

I walked across the street from the marina where sponsors had set up a big tent with a projector hooked to a TV so they could show the game to locals for free. I've got to admit that I know very little of the rules of the game, but it was quite exciting to watch. The noise levels when Samoa scored a goal forced me to put my fingers in my ears. The refs were a hoot; they were mic'd up and their conversations with each other and the players were entertaining to listen to. Too bad Samoa lost 13-5; the honking and shouting went on til the wee hours anyway.

It was stinking hot and just sitting was cause for sweat to drip and soak my t-shirt. Not much of a breeze in this protected harbour. Thank goodness the water was free and drinkable as we consumed an awful lot of it. And we washed everything we could think of again. The 'cold' showers were a welcome respite at the end of the day. The marina was cheap, but that was the only bargain here and we decided to move on to Tonga when a 2-day weather window of wind became available just a week after our arrival. So long, Samoa!
----------
radio email processed by SailMail
for information see: http://www.sailmail.com/

Posted by yolotrautz at 9:35 PM No comments: