Once our broker told us we'd done enough cleaning (she rated our boat 8.5 out of 10), we whooped with joy and packed the van and headed home to Michigan to cool off for a spell.  We went through the process of proofing the listing and making changes and corrections for several days and then let 'er rip.  YOLO is now listed for sale on www.yachtworld.com!  She's a 42' PDQ Antares catamaran if you want to go look it up. The search engine on yachtworld can be tricky, so here is the listing site:
http://www.yachtworld.com/boats/2003/Pdq-Antares-3123696/Deltaville/VA/United-States#.WasyxciGPIV  You should be able to copy and paste the site into your browser line.

We left the heat index of over 100 degrees in Deltaville and drove to MI where it was dipping into the high 40's at night already.  The days never hit even 80 degrees and we ended up wearing long pants and sweatshirts all day and sleeping under a down comforter.  Boy have we gone soft!  The water was actually warmer than the air here at the cottage.

We got in and dug up the rocks that the ice had moved around from our shoreline.  We piled them up and realized how much damage the high lake levels have done over the years.  We stopped at the recycling area and loaded the van with some more rocks to dump on the shore to bolster the ones there already.  The rocks give the waves somewhere to expend their energy and deposit any floating debris before they smash into the dirt shore.  They are good for the waterfront. 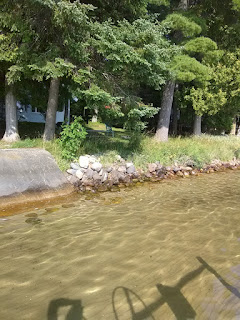 The white 'rocks' here are actually the tiny sun-bleached shells of a bunch of zebra mussels that have been thrown up on the shore. 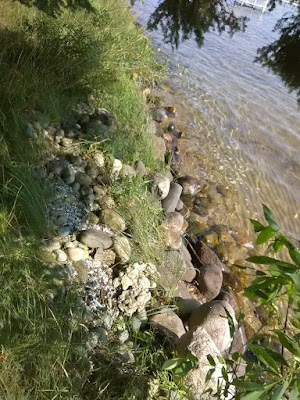 We try to move the rocks that fall out onto the sand back onto the shoreline. 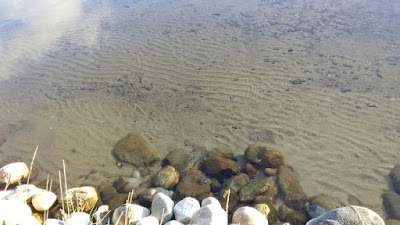 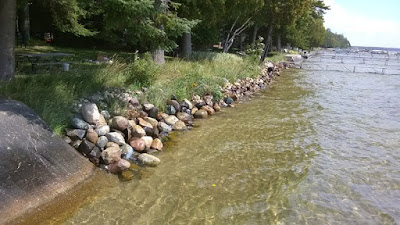 On our second trip to the rock pile, the attendant came out and told us we couldn't take any more rocks.  This is the same lady who'd told us earlier that we could take them as she was tired of looking at them and they'd been just sitting there for at least two years. But she'd mentioned to her boss that she'd told us it was ok to take them and his boss immediately rescinded that permission, stating the township was "going to use them".  We have no idea what for; we aren't sure we even believe it, but we acknowledged the new directive and had to be happy with the rocks we had.  Small town politics may be at work here, so Jason will ask the township supervisor (he was the one who said we couldn't take the rocks) what the township is going to use them for.  I'm interested to hear his answer. 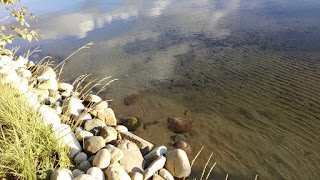 We contacted some old friends here at the lake and met them at Fred's Restaurant in downtown Roscommon.  It has 1/2 price pizzas on Wednesdays and the place was packed!  Our pizzas filled us up.  Fred's had been around forever, and even though it's changed hands and is under new ownership, they are still known for their pizzas. 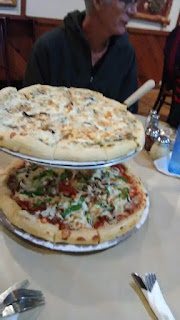 Jason at Fred's Restaurant.  All the wall decorations are made of wood, including the pictures; kind of neat. 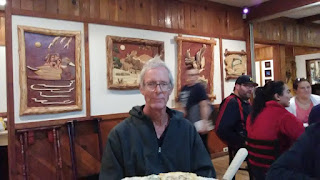 After picking out the peas that were taking over the waterfront, I found some of my mint coming back. 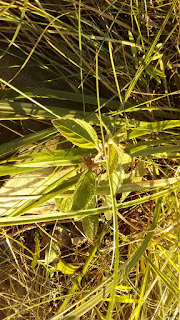 A nice ripple pattern in the sandy bottom in front of our cottage. I love that the water is so clear you can look through it to the sand. 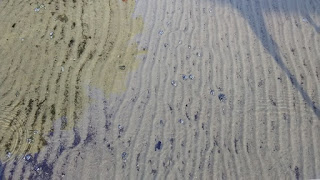 Karen still trying to get a selfie right.  Caught Jason looking like the unibomber in the background. 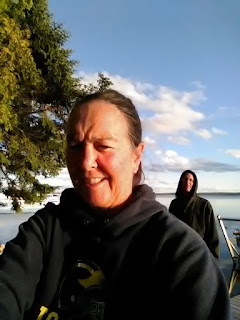 The pink glow just after sunset at Higgins Lake. 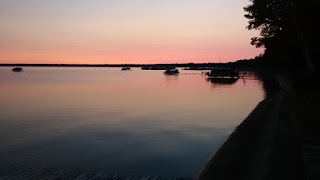 Jason working on the leaf blower to get it to start better.  Critters had chewed up parts of the plastic and had to be replaced. 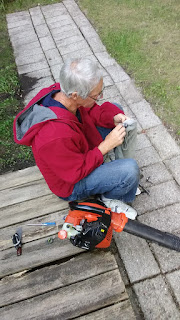 A cool looking mushroom we saw on our walk through the woods.  Most of them have been nibbled to nothing by the critters.  They hadn't found this one yet. 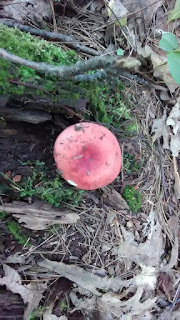 The nip in the air is bringing out the red in some of trees already. 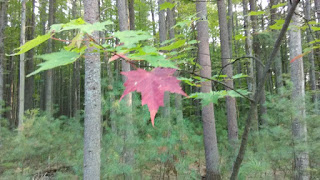 Another noise toy getting a workout at the lake. 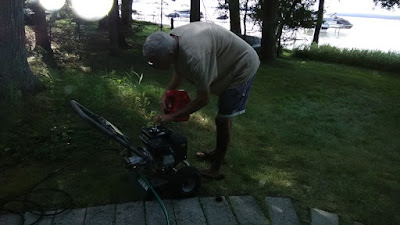 Jason at his other pasttime, snoozing.  Sitting in the sun is always relaxing when it's cool outside. 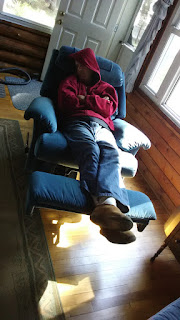 Our yacht listing was followed by the brokers sending out the info to their list of potentially interested buyers.  Two were immediately interested but the broker hadn't realized we'd left the boat, too.  We wanted some down time so agreed we'd go back to VA after the holiday weekend and entertain the prospects by showing them YOLO ourselves after we got back.  People who were interested in this make/model of boat that had missed out on previous used ones, were eager to get to see our boat.  They don't come up for sale often and ours is the cheapest one in all the listings.  It's a great boat at a good price (about a third of the cost of a new one) so we're hoping these early responders are truly interested and snap up the deal.  It's a huge undertaking to put the sails back on and get YOLO launched for a sea trial if anyone is really interested. We will only do that once; once the sails are back on, either it gets sold or we move it to the warmer climes for winter.  That's my take on it anyway.
Posted by yolotrautz at 12:22 PM 1 comment: