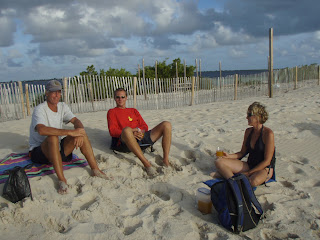 Jason, Vytas, and Tracie starting on the rum drinks in Barbuda. 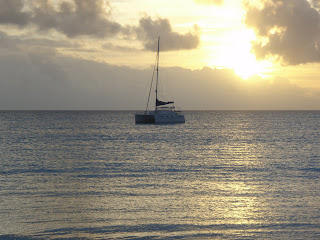 YOLO anchored off Low Bay in Barbuda. We're at the beach party below drinking rum and cokes with the fellow cruisers we met that day. 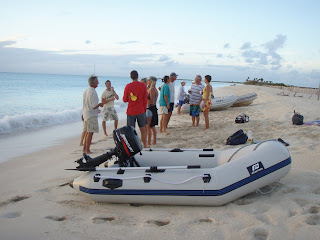 One long beautiful beach at Low Bay, Barbuda. The dinghy in the foreground is the one we carried up over this beach to a lagoon on the other side to go clear into Customs and Immigration. 'Customs' was a room in some guys house, with cardboard boxes stacked haphazardly against the wall, representing the last 7 years of their records. We had to walk through his living room (with a new 27" tv sitting on a table) to get to the tiny office. The others waited on his front porch while we filled in paperwork. Gotta love the islands, mon! 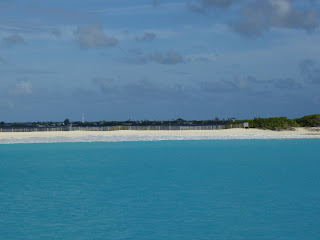 The beach at Low Bay, Barbuda. Notice the sand fence they've put in to trap the blowing and drifting sand. Several hurricanes had cut through to the lagoon beyond and damaged the town, so they are trapping the sand and planting native vegetation to reestablish the sandbar for protection. They expect the fence to be covered within 2 years and to help give the dune structure. The sand is soft and warm and has a pink glow to it from some pink shells. The water is all stirred up but it is still pretty.

What's left of our Venezuela flag after whipping in the wind over 2-3 months. It's almost 1/2 gone as there are supposed to be 7 stars on the blue stripe. Unfortunately, our American flag didn't fare much better and we had to take it down out of respect for the flag. 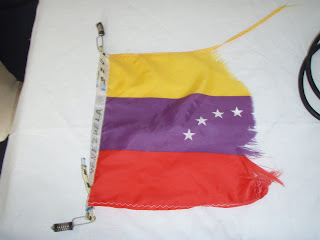 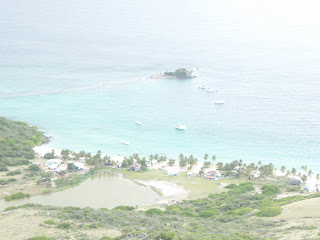 Our anchorage at Los Testigos. YOLO is the 3rd boat if you start at the island and go clockwise. Jason took this pic from the lighthouse at the top of the 822' hill.
A sunken megayacht at Los Testigos, VZ. We never got the story behind this but it wasn't here a few months ago when we came through. 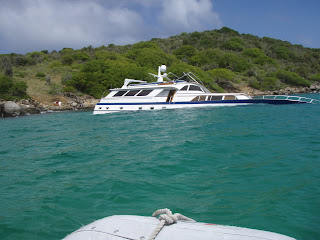 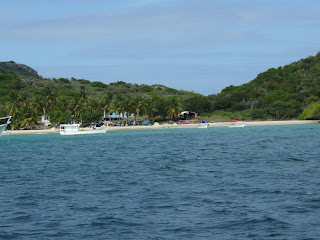 The village at Los Testigos with fishing boats. 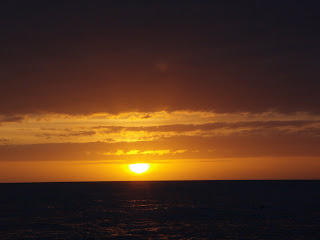 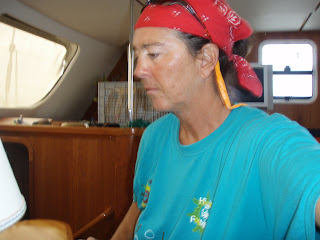 Karen pulling the weather faxes from the SSB radio. I'm not that sad, really, just concentrating while trying to take my own picture! 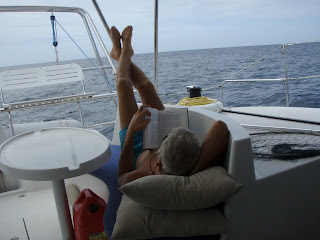 Jason relaxing during our passage. I think he's on watch, too!

Tres Palmeras Island where we sat for 5 days to wait for a weather window. The turtle research facility is also nearby. 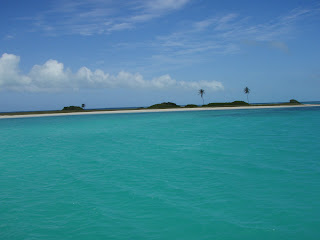 Its Valentine's Day and we are heading back to Margarita Island off the coast of Venezuela to refuel and reprovision before heading on to Grenada or points in the eastern Caribbean island chain. We had to wait 5 days in Tres Palmeras (3 Palms) for a break in the wind/waves. Guess how many palm trees there are on the island?? Exactly.

But the neighboring island of Dos Mosquises has a turtle research facility on it and we took the dinghy over yesterday and got to see turtles of all sizes and ages. We even got to hold the little 6-day old ones that were about the size of a silver dollar. Too bad I forgot my camera again. Tons of old conch shells make up the edges of both islands that tribes from Venezuela settled around 1300AD. They used the queen conch for food and lots of other things it is believed. Archeologists have excavated lots of little artifacts and figurines that are unique to the tribes and these islands by digging trenches and pits under all the conch shells. Pretty neat! It's amazing to see piles of conch shells so high.

The live conch crawl and hump along all over the grassy bottoms around here, If it weren't a park, I'd have to collect a few and make conch fritters again. I did collect a few small shells of bright colors to eventually make into earrings. Been so long since I wore jewelry on the boat that I'm afraid my ear holes will close up. And who needs earrings when you're naked sailing??

Feb 28
We finally made it all the way to Barbuda, just north of (and part of) Antigua. We stopped at Margarita Is but our timing was off and we got to the north coast near midnight and saw what looked like fireflies on the water all around. They were strobe lights attached to fishing nets from all the fishermen out at night. Exactly what we didn't need. And then the rain came and blacked out our view of much of the area, along with a fog (that was a first for us in the Carib.). So we just continued east until we were sure we'd miss them all and then turned south to make our way in between the rocky islets and the main island of Margarita. A power outage blackened much of the coast and at least one light beacon was not working, making navigation at night a challenge. My eyes still ache from looking thru the binoculars straining to see if there was anything in front of us we might hit or snag. We did make it to port when the sun rose and we could see again.

We topped off our water and fuel and cleaned out 2 liquor marts and a BP gas station of all the Superior rum they had. Ended up with about 6 cases of the stuff. At around $2 per bottle, we are set for this season and maybe the start of next year. Our friends on Jus'Now asked us to pick up a few cases for them and hope to see us again next year to collect it. If not, rum doesn't go bad and we'll find a way to dispose of it, I'm sure..... And of course, we had to get more Coke/Pepsi to deal with all that rum! So we added well over 1000 pounds to YOLO with all those liquids, and she sits a bit lower in the water now, making a fast run less likely.

We fought our way back to Los Testigos and stayed there 5 days to let another swell go by. Jason hiked to the lighthouse on the top of the island, but snorkeling was disturbed by the current and the water around the reef was all stirred up, so we lazed around and read mostly.

We came straight up from Los Testigos to Barbuda, bypassing all the islands in the chain and crossing in the straightest, shortest line to reach here in 3 days. We had 15-25 k winds and the seas were 5-9' most of the way, making the ride lumpy. The wind on the nose and the current still swooping up and around from South America pushing against us meant we still had to do some motor sailing but managed to get some true sailing in this leg. We had a fairly calm spell and decided to run the other engine for a while and found it had water in it. Thank goodness Jason is so diligent about learning how to deal with these things. We had to change the oil in the engine 2x to get all the water out before we could hand crank and start the motor. But we prevailed and dropped anchor in a very beautiful place with not a road in sight!

The water here looks like God poured himself a giant gin drink into a sandy bottomed glass and just left it while he went looking for olives. Unfortunately the water this time of year gets stirred up by the wave action and the sand makes the water turbid so snorkeling just now is not so good. But the beach here is awesome! And the water colors are still gorgeous. Met some other Americans here and we had an impromptu beach party last night with some Canadians and New Zealanders joining in for the fun. We had waved the Americans over as they were getting into their dinghy to head to the beach and hopped a ride with them to check into Customs/Immigration/Port Authority.

There is no dock here, so we had to surf the dinghy onto the beach and drag it up and over the sand spit to the lagoon on the other side where we could then dinghy over to the town. Landing a dinghy in the surf creates tension/anxiety or amusement, depending on whether you are doing it or just watching others try. Their dinghy and motor was easy to manhandle with the 4 of us and Jason and I later reckoned we couldn't have drug/carried our dinghy that far up and over the sand. The alternative was to call for a boat boy from town or a $60 taxi ride. Lucky we snagged that ride! Vytas and Tracie on Sunshine Daydream (he's a Dead Head and named the boat after one of their songs) were great company for the day.

We've heard of the stikes on the French islands of Guadaloupe and Martinique and heard some firsthand accounts of the troubles they are causing for cruisers. We'd hoped to stop in some of those ports, but with all the stores shut down and no food, water, fuel, or currency available, there doesn't seem to be much reason to do so. We visited them on the way down the first year, so we're going to be more picky about where we spend our time this season in the chain. So our next stop will be Antigua and then, who knows...???

This tiny sand outpost of Barbuda has free wifi we can pick up from the boat so we have an internet connection after so long without one! Send emails quickly so I can catch up with what's going on in your worlds of work and pleasure. We've had so little news of any sort lately. We know you're having a very bitter cold winter up north and the economy still sucks, but we'd love to hear your details and whatever else is happening in the 'real' world out there. Stay sane and healthy!
Posted by yolotrautz at 1:37 PM No comments: