August was a hot month.  My nephew, Gabe, flew into Petersburg (about 90 minutes away) for
some training and we got together for lunch when he was done.  I hadn't seen him since he was a small boy. Now a grown man with a wedding scheduled for the next month in his home state of Montana. 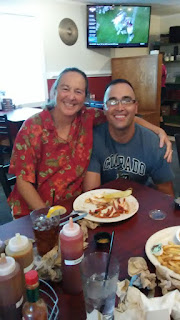 We met at the Two Drummers Smokehouse BBQ restaurant that an old guy running an antique store told me about in Toano. Two brothers who grew up in the fife and drum corps here started their own barbeque restaurant and it was getting great reviews. 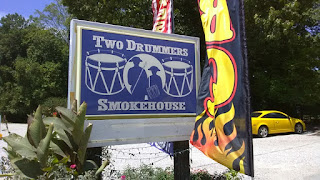 The smoker was running full tilt outside the restaurant and we had a great meal. 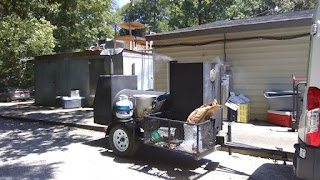 Jason hung a For Sale By Owner sign off the back of YOLO in the boatyard just in case anyone driving around might be interested.  We needed to get the boat broker here to take proper photos and list it for sale on the web.  We're ready for any prospects that the upcoming boat show in Annapolis might turn up, too. 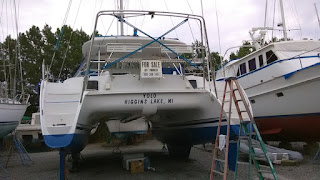 We took a day off and went to a riverside park with a little beach known for its fossils. Not the shark's teeth that I wanted to go hunting for, but the state fossil, an ancient scallop.  This is the beach, viewed from the cliff above.  It isn't very wide and we had to time our arrival for low tide, but we did find some old shells. 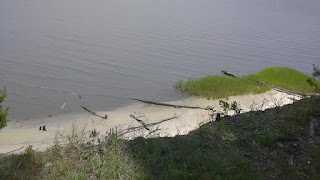 The backside of the fossilized scallop is covered in these old barnacles.  We see lots of barnacles on the boat so these didn't impress me much. 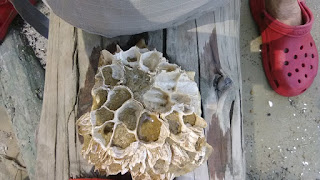 It got so hot most days we just had to quit in the mid afternoon and go to the pool.  The boatyard also owns another boatyard and marina that has a pool/grill/showers/air-conditioned lounge area that we took advantage of.  I packed something to grill for dinner and our shower stuff.  A stop on the way at the 7-11 for some Big Gulps and our evening was set.  We even took advantage of the 'Bring YOur Own Cup Day' and filled a pitcher with Slurpee for $150 both days.  Hadn't had one of those in years!  My hands were too full of Slurpee to even take a selfie.  Some vege-out in front of the TV was a good way to spend some time while Jason moved around trying to find wifi reception.  He had to sit outside the lounge to get a signal; inside just wouldn't work for him.
The total solar eclipse passed a bit south of us and we got about 84% coverage of the sun.  We were in the cool library when the eclipse was going on and the lady there let me use her dark film glasses to view the sun.  It looked like a tiny fingernail moon, but we never saw any decrease in the daylight; it never got darker where we were even though only 15% of the sun was all that was uncovered.  Pretty mighty sun!
Karen with sunglasses and solar viewing glasses, looking at the near-total eclipse of the sun. 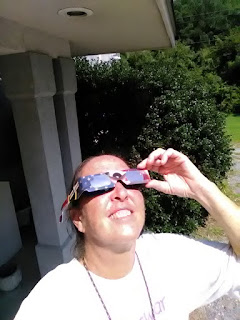 A few days later, our broker showed up to take photos to list our boat for sale on Yachtworld,  Yes, it's really happening; the end of an era for us!  go to www.yachtworld.com and look for a PDQ catamaran that is 42' long.  You'll see our boat.  Feel free to tell your friends about the great boat available for someone with a dream!  You Only Live Once! 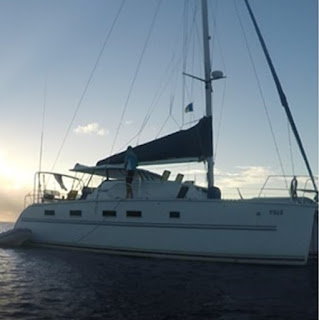